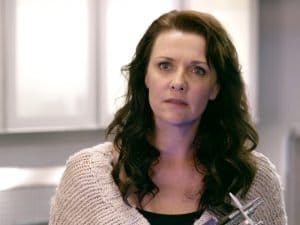 A strange device causes some kind of a dimensional switch for the four workers of a sanitation space station with some weird consequences.

Valentina, a crew member on the sanitation space station

The idea for Space Milkshake came from Robin Dune, with whom Amanda had worked in Sanctuary.

She had a great time and the cast bonded well, also getting together after work to have dinner, go to the gym, do yoga and so on.

Amanda has emphasized how Billy Boyd (Anton) is one of the funniest people she has ever met. At the end of the shoot, they were in the elevator of a hotel, leaving for their rooms to catch their respective flights and Billy had to leave first. He stepped out, turned around and said, “It’s all been shite!”, leaving the others in stitches as the doors closed.

I'm alive! Regina's cold but the people are so warm. #SpaceMilkshake is a blast. Still trying to get a picture that shows the red hair.