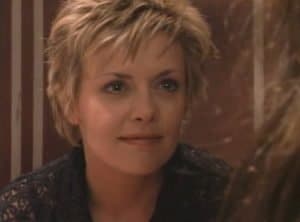 Trigger warning: The movie has graphic depiction of drug addiction, a sex scene (no nudity) and contains graphic descriptions of abuse.

Synopsis by Amanda
“It is about four people stuck in an elevator. These are four very disparate personalities so there is a lot of tension and clashes between the characters. I play a character named Liz. She is a heroin addict and a very messed up girl. JR Bourne plays my boyfriend, Bernie. He does not do drugs, but he enables Liz and even helps her shoot up. It is clear that these two love each other a lot. Bernie is an antagonist and constantly tries to get the other two characters to let down the “walls’ they surround themselves with. The other characters are Cindy (played by Courtnay Kramer) who is a seemingly uptight girl. Very rigid and very “preppy”. But, of course, she has secrets to hide. The fourth character is Gordon (played by Fred Henderson). He is an uptight business man and very set in his ways and his ideas about how society must function.
The film deals with people’s secrets, the masks we wear and how we are “stuck” in this world because of deception and the labels we use to determine our view of society. It is very heavy and at times violent. But ultimately, I think, it is poignant and touching. JR and I have a rather raunchy love scene, which was very difficult to shoot but I think was necessary to shock the other two characters. It was a great acting exercise for all of us. We rehearsed the film for two months (on weekends) before we shot it. The film ends with some heart wrenching monologues from each character.
I am proud of the work we all did on this film and hope we have a good final product. Jan Newman, who does my make-up on Stargate volunteered her time and expertise to do make-up on the movie. It was wonderful to have her there! We all did this film for no money. For us it was about creating and exploring and stretching ourselves. It was great to be part of an artists co-operative committed to creating.”

Amanda is proud of the fact that the film was so honest. It was emotionally intense for her, while also being special because of the shooting, which gave Amanda a feel of doing independent theatre.

As a preparation for the role, Amanda went with JR Bourne to an impoverished part of Vancouver, where people literally shoot up in alleyways, and looked at heroin addicts. Amanda was struck by the poverty and the sense of desperation and hopelessness and it was an eye-opening experience to her.

Some more trivia from Lindsay Bourne, posted on Gateworld in 2007:

Currently not available to buy. Watch here (Password: The name of Amanda’s character. Feel free to contact me if it doesn’t work.)