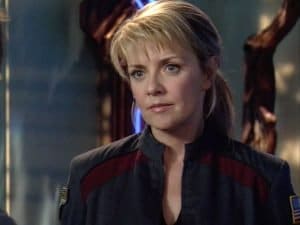 In Stargate Atlantis an expedition of military personnel and scientists live in the city of Atlantis and explore the Pegasus galaxy while fighting against new enemies.

Samantha Carter made two guest appearances, due to Atlantis having contact with earth. She also has a guest role in the episode “Grace Under Pressure” where she helps a distressed Rodney McKay even though she is just a figment of his imagination.
In season 4, she takes command of the expedition, successfully fighting the Wraith, only to be abruptly told that she has been relieved of command when she is recalled to earth for a performance review.
She has another short appearance in the series’ finale.