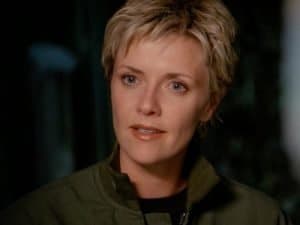 Stargate SG-1 is a spin-off of the Stargate movie from 1994. It portrays the adventures of a team called SG-1 who go on missions through the Stargate, a device connecting Earth with other planets, while trying to defend earth against hostile alien races.

How was the audition for Stargate SG-1?

Amanda Tapping auditioned for Stargate in Toronto with hundreds of other people, but assumed the role would go to an American actress. To her surprise, a few weeks later she received word that she had been shortlisted and had to send a demo reel. Then she heard that it was down to three people and that it was starting to get serious for her.

They flew her over to Los Angeles for auditions. There were the three shortlisted actors for each character. Casually, Christopher Judge, Michael Shanks and her started talking and hanging out together during the auditions. She then had to come up on stage. She was nervous, she could not see the audience as it was completely black. Richard Dean Anderson was on stage as he was reading. After that audition they sent a bunch of the actors home by calling the names of the actors they wanted to leave and so the actors were talking amongst themselves, saying “they didn’t say our names, right?” as it would’ve awkward if they’d stayed despite being named. In the end, it was down to two Sams. Brad Wright came up to Amanda and suggested keeping up the goofiness she had done in between the scenes as the Sam Carter of the pilot is not so funny. Then the actors had to go back on-stage in front of the executives. The executives then had Richard and Amanda stand next to each other, in order to check out what they looked like together and Amanda joked, “So, is this like the swim suit part of the competition?” which made Rick laugh.

She flew back home right away, not knowing that the producers had wanted her to stay in L.A. as her agent informed her some hours later. Two weeks later she received a phone call informing her that she had gotten the part and had less than two weeks to move to Vancouver.

Did she know MacGyver previously to Stargate?

She had not seen it, her only point of reference at the beginning had been The Simpsons.

Amanda feels Sam and her have grown together:

“Playing Sam taught me a lot about strength of conviction, about standing up for myself, about not backing down when I thought there was something worth fighting for and I hope that I taught Sam how to have a bit more of a sense of humour but I really feel like in the course of the 10 seasons we grew up together, we became strong women together. So I learned a lot from playing her and it informed a lot of who I am today.” (FedCon 23, 2014)

Amanda Tapping’s first influence on Sam was even before the pilot of Stargate SG-1. When she arrived at the wardrobe department, there was a low-cut tank top and a push-up bra she was supposed to wear. She refused on the grounds that it did not feel true to the character for her, even though she was panicking that this could cost her job and made her burst into tears. Luckily, it had been something that had come from someone higher up in MGM, whereas the producers were fine with her not wanting to wear that, but just wanting to wear what the men were wearing, namely standard military uniform.
The next big influence she exercised was after the pilot. She had disliked the “just because my reproductive organs are on the inside instead of the outside, doesn’t mean I can’t handle whatever you can handle” line and had unsuccessfully tried to get out of saying it. Since she was on probation during the pilot and could have  been dismissed afterwards, she did her best and did not fight it. Only afterwards, once it was sure that she would keep the role, she went to the writers and asked them to write Sam as if they were writing for a man, where they would not put all of the female references that they were writing in and continuously flag the fact that Sam was a woman, but just trust that Amanda would bring an inherent femininity to the role.
At the end of season 1 the writers asked the actors about how their wishes for the development of the characters and Amanda asked them to warm Sam a bit more up as Amanda herself is goofy, whereas Sam was rather rigid in the beginning. “I think that I forced a change in Sam because they didn’t write her very well initially. They wrote her very one-note, almost bitchy, pedantic, up on her soapbox, the big feminist argument. As much as I’m a feminist I’m so not about being preachy about it but about just proving it. So I think they’ve allowed that. I would like to think I’m a lot warmer than she is so I’ve asked that layers to be given. It’s part of the whole thing about doing a series. They have to write these characters fairly contained, linear, then they get the actor who breathes life into them.” (Article Stargazers in Starbust, 2001)

Over the years she tried to keep Sam’s character true to herself, particularly once she realised how big of an influence Sam was on young women and girls. “If there were things that I found compromised the character in a way that would either look bad to the military or might make my younger female fans feel weird about the character then I would talk to the writers about it.” (LFCC 2013) Obviously, sometimes it was not possible to make changes, but she did manage to have minor lines changed. She became aware of the impact of the character as she started to get thousands of letters from female fans writing about how the character had impacted them. As a result, she felt a certain pressure, a sense of responsibility to keep the character good and not disappoint, but it was a good kind of pressure to her.

Was it hard to learn the technobabble and did she actually understand it?

She did a lot of research to understand what Sam was saying, reading books like A Brief History of Time by Stephen Hawking. Then she would break it down into layman’s terms and explain it to Alan, her husband, before going back to the technobabble. She wanted to sound convincing, hence the decision to actually learn it.

Once she even noticed a mistake in a script where an equation was wrong and corrected it.

She would not be able to answer astrophysics-related questions now, though.

Has Amanda ever gotten hurt during a stunt in Stargate?

Yes. Amanda Tapping describes herself as prone to injury.

In the episode “Enemy Within”, when Kawalsky pushes her against the wall of the elevator and Sam crumples down, it is actually Amanda crumpling down as she actually hit the wall, suffering a slight concussion.

In the episode “Family”, she was running with Daniel, firing the p90 and they had to pass by the mark, where an explosion was supposed to happen. The special effects technician was told that two people would pass and then he should trigger the explosion. However, he was not aware that there were actually three people, since the actors were preceded by the cameraman. As a result, he triggered the explosion just as Amanda was passing by. She survived pretty much unscathed, just her make-up melted.

She has also twisted her ankle, burned her hand on a barrel of gun, gotten hurt by shell casings of the p90 and more.

Has she been pranked on Stargate SG-1? Has she herself pulled pranks?

There were a lot of pranks on set, all the time, Christopher Judge being the biggest prankster, doing things like duck-taping them to chairs. Richard Dean Anderson would try to get people to laugh while on camera, which was an easy thing to do in Amanda’s case and she often had tears of laughter streaming down her face, so that they had to redo her make-up and they started putting waterproof mascara on. She herself did not really pull pranks on the others but believed that karma would take revenge for her.

The biggest prank she did, and one she is proud of, is a blooper that she is repeatedly asked about. It happens in the episode “Solitudes” (video). They were filming in a refrigerated studio so it was really cold and Martin Wood told her that if she had any chance to have fun to just go for it, as the crew could use a good laugh. There was that moment with Richard Dean Anderson crawling up in the ice and the words just came out of her mouth. She got bolder and bolder as she was talking, though by the time she got to “MacUseless” she realised what she had just said and that she might have gone too far. So afterwards in the lunch line she went up to Richard and asked him whether they were good. She had managed to get the crew to laugh though, so: mission accomplished.

Who is Amanda’s favourite guest star?

Amanda has had a hard time deciding over the years but most frequently she has named Carmen Argenziano (Jacob Carter).

Which episode does she like the most, and the least?

An episode she was not thrilled about was “Emancipation”, as she found the story to be too simplistic and she felt embarrassed, as it was the first Carter-centered episode. She did however enjoy the fight scene.

What has been the funniest episode/moment to shoot, and the most difficult?

Episodes “Wormhole X-Treme!” and “200” were particularly funny. She also really liked playing the geeky, goofy Sam in season 8. “Urgo” was the funniest episode as Dom DeLuise would constantly say things that kept them in stitches.

What was the most memorable moment in shooting Stargate?

Shooting the pilot was memorable as she was living with Michael and Chris in a hotel and had good chemistry with them from early on.

The most memorable moment of Stargate for Amanda Tapping was on the last day of shooting. The last scene they did was going up the ramp and in the end they all started crying. Then, Christopher, Michael and her sneaked up into the briefing room and looked down at the gate. It was very emotional. It paralleled the first time they’d seen the Stargate from the briefing room and had gone, “Wow…”

The whole experience in the Arctic (Stargate Continuum) was also particularly memorable.

If a fourth Stargate series were to happen, would she go back?

She would, and she has emphasized this at several conventions. At the convention AT10, she jokingly listed a series of requirements like lots of shiny stars on her uniform and being allowed to travel through the gate.

What does Amanda Tapping think Samantha Carter is doing by now?

Amanda mostly has answered this question by saying that Sam would be the head of the Stargate Command. She has also hinted at the possibility of Sam and Jack being together with him being retired now.

Would Amanda herself go through the Stargate? And which planet would she visit?

She would go to through the Stargate, as long as she knew she could come back. She would take her family. The planets she would visit would be Argos or the planet with the Nox.